The Blockchain's potential in the financial industry: Towards banking without banks?

For hundreds of years, financial institutions have played a key role in our society, playing the role of trusted middleman (trust intermediary) that connects the plaintiffs and bidders of financial assets[1]. Even in the face of financial crises, which generated the loss of public confidence and a complex discussion about the proper infrastructure and regulation of the financial industry, it had never been proposed to replace traditional banking.[2]. On the contrary, some financial institutions were considered too big to fail ("too big to fail ") and were rescued by governments to avoid disastrous systemic consequences in the economies.

However, it was not possible until the context of the financial crisis of the 2008 year and the new information age, that a movement could be deployed that, through technological innovation, generated a new debate that does not revolve around how to improve the financial industry and its regulation, but on the question of whether these companies are really necessary to provide financial services, which involves what is now known as fintech (financial technology) [3].

As part of this phenomenon, the blockchain (chain of blocks), a type of ledger distributed (distributed ledger technology or DLT), was created to promote the first cryptocurrency in the world (Bitcoin).  But this technology not only challenges banks operating digitally and quickly, but in essence, their structure challenges the paradigms of established economic, legal and political systems.[4], inasmuch as it proposes a change in the bases of social organization to carry out economic exchanges between two parties (peer-to-peer) without the need for a trusted intermediary, recording transactions in a distributed, transparent and immutable way like never before[5]. 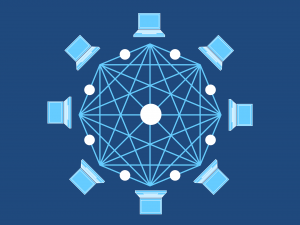 Thus, leaving aside intermediaries, blockchain, also known as "Internet of value", is presented as one of the most revolutionary technologies, promising to drastically reduce transaction costs[6] (which in the case of financial services will involve reducing or eliminating, for example, interest rates, commissions and expenses), which represents an enormous potential to boost economic and social well-being. Therefore, in recent years we have witnessed a great wave of interest in the implementation of this technology and a great discussion about the regulatory framework that should have.

The main actors are governments, regulators, financial institutions, large technology and telecommunications companies, entrepreneurs, venture capitals, consultants and academics from around the world, whose approach ranges from the entire financial services industry (payments, deposits, loans, capital markets, insurance, etc.) to any other sector and activity traditionally required by an intermediary to validate their transactions (as supply chain, transport, health, identity, property, democracy and collaborative economy).

With all this attention, we are many who have asked ourselves how it works. Well, so far, I've only mentioned that the blockchain It is a distributed accounting book characterized by transparency, immutability and security, and that offers a main benefit: the reduction of transactions due to the automation of trust. But, how is it possible to have these characteristics?

In simple terms, distributed accounting book (DLT) technology, unlike a traditional ledger[7], is not managed by a trusted intermediary, but by all participants of a synchronized network (called "nodes") simultaneously, together forming a common ledger[8]. This is why the DLT provides, by definition, more security than banks and other intermediaries: if a node is destroyed, it will not affect the database, since it is replicated at all points of the network (« nodes »).

In addition, there is no trusted administrator who knows the content of the information and validates the transactions, but, through a mathematical consensus mechanism of the nodes («hashing«), These are encouraged to validate transactions chronologically[9] ( "timestamp"), Whose information is encrypted with a public key.

It is this characteristic that represents the automation of trust. Unlike a bank or any other financial intermediary, a network of nodes, adequately incentivized to tell the truth, will validate the transaction. This feature also implies greater security, since hacking the system would require hacking more than half of the nodes in the network.

Likewise, blockchain -as its name makes it evident- consists of a chain of blocks, where each block contains any type of information about the transactions that we want to make (the registration of identity data, assets, properties, money, Smart contracts[10], etc), as well as the information of the blocks that precede it. If someone tries to modify the data contained in a block, the entire network of the nodes can know it.

In addition, thanks to the use of cryptography, while all the nodes can see each chain of the network, only those that are authorized by a private key can access the information.

Seen like this, blockchain It promises to be an effective tool for the exchange of financial assets. Along these lines, it has been pointed out that it can boost the simplicity and efficiency of financial services through the establishment of new infrastructures and processes, in aspects such as the simplification of financial operations, the reduction of counterparty and fraud risks, reduction of the settlement time of the transactions, as well as the improvement in the efficiency of the financial regulation.[11]

However, the idea of ​​being able to make exchanges between people, in the same way in which we send information (emails, tweets, etc.), implies establishing new bases in our society, where legal institutions such as contracts, property, regimes of responsibility and certain rights currently defined on the trust intermediary paradigm, will encounter certain frictions.

The questions will vary greatly depending on whether the blockchain es permissionless (for example, Bitcoin) or a permissioned (like Hyperledger), which means being freely accessible to the general public or a private network that requires prior approval, respectively. In the first case, there are all kinds of legal concerns due to the unprecedented model of government, in which anyone can access the network and be a node (civil law, consumer protection, civil liability, etc.).

A representative challenge in both cases will be the apparent conflict between the immutability of blockchain and the "right to be forgotten" that is part of data protection. However, it should be considered even in this case it is possible to reconcile the technology with the law.

Thus, mechanisms can be developed not to "eliminate" the information but to restrict its access permanently. Therefore, when concerns arise about going against a certain rule, it must be taken into account that it is necessary to go beyond the literalness of a legal text and think about the principles and interests that are intended to be protected.

In sum, it is evident that, if more efficient and effective alternatives emerge than those offered by financial entities, they should be considered and applied; but you should keep in mind that the blockchain it is not a panacea: behind the use of this technology there are still people who interact in different ways with different interests. There is no safe or reliable 100% system and without errors, the manipulations can come from outside the block chain and affect the confidence of its participants. This is where there is a complex task of law to try not to discourage technology and at the same time seek the protection of legitimate interests.

The great potential of blockchain, is therefore, to drastically reduce the costs of financial transactions, which can make financial services accessible to more people, consequently achieving their democratization and - along the way - financial institutions are significantly reduced in size and number However, adopting this technology requires a paradigm shift in our society, which at the end of the day will depend on us.

[2] Criticism tends to highlight unethical behaviors under moral hazard within the financial system, a situation that is generally observed in financial crises, even from the first bank rescue in ancient Rome, as shown in the introduction to this documentary: Hoffmann , Torsten; 4k Content Hub; Watchulonis, Michael. Bitcoin: The End Of Money As We Know It, 2015

[7] It can be a centralized database (based on the hub-and-spokes model) or decentralized (hubs and spokes of decentralized accounting books). Being a unique ledger, there are barriers to the manipulation of stored data. See: Dirk A. Zetzsche, Ross P. Buckley, and Douglas W. Arner, 'The Distributed Liability of Distributed Ledgers: Legal Risks of Blockchain', SSRN Electronic Journal, 2017 .

[8] As long as the stored data is replicated at the same time in the nodes of the network, it is considered that there is less risk of manipulation. Zetzsche, Buckley, and Arner.

[9] Reaching consensus requires that more than 50% of the participants agree on the current state of a blockchain. The consensus algorithms in blockchain are usually Proof-of-work (PoW) and Proof of Stake (PoS). For more details, see: 'IOSCO Research Report on Financial Technologies (Fintech)', 2017

[10] They are computer programs with self-executing code that automatically implements the terms of an agreement between the parties based on certain pre-written logic stored and executed by the nodes in the DLT. For further discussion, see: Lin William Cong Zhiguo He and others, 'Blockchain Disruption and Smart Contracts', 2017

Jacqueline Escobar
Jacqueline is a specialist in Fintech, Legaltech, Financial Regulation and Capital Markets. Intern in financial services by the International Bar Association (IBA) and ITEC Scholarship Training Program. She has worked as a Legal Analyst in the Superintendency of Banking, Insurance and AFP (SBS), in the Superintendency of Securities Market (SMV) and as an Associate in the Banking and Finance area of ​​the Rebaza, Alcázar & De Las Casas law firm. Currently, he is In-house Legal Counsel of Finsmart Peru and Legal Counsel of Fintechlab.

0
Many followers of Bitcoin thought that December would be the month where the price of this asset would start a movement ...
Read more
Articles

0
Are you one of those people who is concerned about the value of your cryptocurrency investment? Yes it is...
Read more
THE CRYPTO LEGAL
1,954Happy fans
514FollowersFollow
91FollowersFollow
*All fields are required

The Privacy Policy seeks to inform the readers of THE LEGAL CRYPTO blog about the use and treatment of the information collected through the blog, as well as the personal data that our readers give us voluntarily.
To read the Privacy Policy press here!.
Press ACCEPT if you agree with the Privacy Policy.
Necessary Always activated
The necessary cookies are absolutely essential for the website to function properly. This category only includes cookies that guarantee the basic functionalities and security features of the website. These cookies do not store any personal information.
SAVE AND ACCEPT