The author writes about the legal consequences of the approval of the Copyright Directive by the European Parliament.

Can you imagine an internet where every meme you upload is preventedly blocked until it shows that it has not violated any copyright? This is about to happen in the European Union with the pending (and probable) approval of the new Copyright Law.

The European Union has presented a new Directive which aims to protect copyright within the Internet. However, article 11 and, especially article 13, have caused controversy and rejection by large corporations such as Google and Twitter and the content creators of these platforms.

How does this Directive affect the Internet as we know it? What will happen to the content that lives on YouTube? How does this decision affect Peru? We explain it to you.

In short, article 13 of the aforementioned Directive, in its final version published in February 2019, states that digital platforms must make their “maximum effort” to acquire the licenses of their respective authors for all the content that their users can load. This measure, in the words of Julia Reda, a member of the European Parliament, would entail acquiring all the copyrights of the whole world: an impossible feat.

Likewise, the duty to monitor the contents uploaded by its users in order to detect any infringement of copyright is indicated. Therefore, these platforms must implement detection filters "suitable" to prevent content from being published without complying with the regulations.

What is the problem with all this? That with the legal imposition of (i) obtaining licenses of, literally, all the author rights in the world and (ii) filtering the contents from which an author's license could not be obtained, the platforms will have no choice but to block the content, which, from our point of view, it violates freedom of expression.

To date, platforms such as YouTube or Facebook had security filters that, in a preventive way, blocked content that could violate copyright. In this sense, the market was self-regulating. It was the agents themselves who imposed their mechanisms to prevent more users from uploading incorrect content.

With the new Directive, the European Union attributes direct responsibility for copyright infringement not to the users that upload the content but to the platform that houses it, so these platforms would have no choice but to block everything in its path (This includes digital products without third-party content [ie, original 100%], digital products with third-party content but used legally, and products with copyright infringement).

Companies like Google have pointed out that about 400 hours of video are uploaded every minute and that, even for a company like this, it is technologically impossible to review so much content in such a short time. So, despite the objectives pursued by the Directive (which we consider to be the correct ones), the way in which it is embodied turns out to be more of an obstacle to the exercise of freedom of expression than a mechanism for the protection of rights.

With the aim of being more expository, we present some graphics based on those made by Jaime Altozamo, a creator of YouTube content, who by doing a mental exercise explains the possible consequences of the Directive: 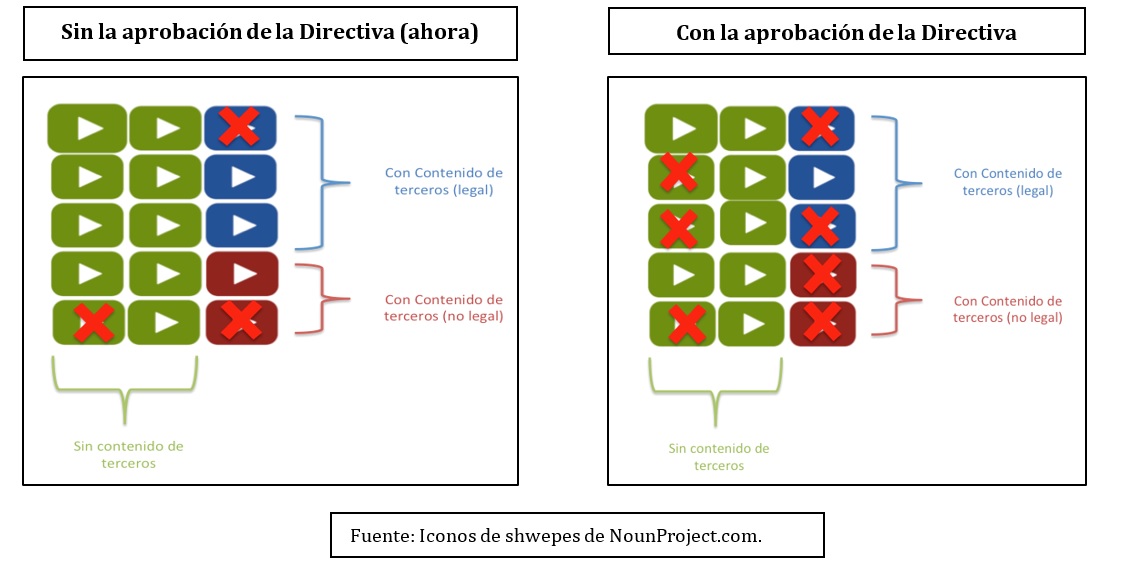 As you can see, currently the filter created by YouTube called "Contend ID" allows you to block a certain number of videos among which are products with third-party content with illegal use along with a small percentage of videos that do not contain content. third parties or with third-party content but with legal use. In this case, the creators of the videos that represent the reduced percentage of blocked products could initiate a manual review procedure to determine if the use is legal or not.

This is the procedure that, despite certain criticisms, works, since it finally helps to determine the videos that infringe the copyright without violating the rights of the other creators of content. However, with the entry into force of the Directive this small percentage could be increased and, thus, more and more videos that do not use third-party content or that use content from third parties but in a legal manner, all in order to be blocked, will be blocked. to prevent videos that really violate the norm from being captured.

What is the landscape for content creators and consumers of these platforms? While the adoption of the Directive is possible, the outlook for content creators is not favorable. Digital products can not be seen on the platform within the European Union, which could generate a migration of content to destinations that do not have such aggressive regulations. As Jaime Altonazo, who resides in Spain, explains, they will begin to make videos in English to reach a different audience because the audience that is obtained in Spain, for example, will no longer be able to consume digital products.

As we indicated, we consider that the blocking of memes, videos or news can be classified as a violation of the right to freedom of expression. This is because it would be conditioning the creation of material to certain parameters that are not reasonable or proportional. In order to provide maximum protection to copyright (which we understand on the Internet is difficult to protect) the legislator is imposing mechanisms that violate other rights such as the right to freedom of expression or, even the right to information, such fundamental in these days. These mechanisms are counterproductive because, instead of promoting the creation of works, it limits them and, in some cases, the censorship, which is highly questionable in any Rule of Law.

For us, the consumers of this type of platform, the outlook is even more worrisome. The massive blocking of information will generate a massive gap of isolation and disconnection with the information found on the Internet. This is, from our point of view, a new form of censorship and, above all, limitation of information.

Although this measure (if approved) will be applied only and exclusively in the member countries of the European Union, it is certain that it will have effects in the rest of the world, especially in the countries of Latin America. In Peru, for example, we believe that this measure will have, at least, an impact on two levels.

A first level directly impacts the audience that consumes and creates digital products to a large extent in the Spanish language. Although videos blocked in the European Union will not be blocked in Peru, the truth is that content creators in Europe, by losing a large part of their Spanish-speaking audience, will not be incentivized to produce more content in this language, so a migration of the language of digital content will be generated. In the same way, content creators residing in Latin America will lose their audience spread throughout the European territory because these videos will not be able to be seen.

A second level of impact is that concerning the legislative policies that our country (Peru) is accustomed to assimilate by the European Union. Indeed, many of the legislative measures of our country are inspired by European standards, so that eventually, the content of the Directive could be collected by the Legislative Power and, if approved by the Executive Power, will be applicable in Peruvian territory. . Faced with this situation, the aforementioned Directive turns out to be a bad precedent in terms of the rights of freedom of expression and information.

The Board is currently being evaluated and is pending approval in a final vote. However, there are several movements that seek to eliminate the wording of these clauses. If this Directive is passed, it would change the Internet as we know it today.

0
On January 21 of this year, Decree No. 6 of the Ministry of Economy, Development ...
Read more
Articles

The camouflaged power of brands: Youtubers and Influencers

0
In the current pandemic context, when you cannot go outside for fear ...
Read more
Articles

Due process and criminal trials through videoconferencing applications: Brief perspective in Chile

0
The beginning of this second decade of the XNUMXst century will be a very difficult period to forget. The number of...
Read more
THE CRYPTO LEGAL
1,954Happy fans
514FollowersFollow
91FollowersFollow
*All fields are required

The Privacy Policy seeks to inform the readers of THE LEGAL CRYPTO blog about the use and treatment of the information collected through the blog, as well as the personal data that our readers give us voluntarily.
To read the Privacy Policy press here!.
Press ACCEPT if you agree with the Privacy Policy.
Necessary Always activated